As discussed in our last post, the knowledge repository Wikipedia emphasizes how few users choose to donate to its fundraising campaigns, noting that this tactic garners more participation than including no information about participation rates. This puzzling pattern reveals how little is known about the mechanisms underlying descriptive norm-based messaging.

Recognizing this gap, a team at The Behaviouralist conducted a field experiment in partnership with the Leukemia and Lymphoma Society (LLS) and Boston University to evaluate the impact of participation signalling. Study participants were first informed about the role of voluntary LLS advocates and asked to estimate what percentage of previous survey respondents had agreed to become advocates for the organisation. Participants were then randomly allocated to one of six possible treatment groups or to a control group. Those in the treatment groups were exposed to varying signals about other individuals' participation rates (i.e., 'We have matched you with 10 other members of the LLS community who have responded to this survey. [Random signal number] of these 10 decided to sign up and become advocates!'). We then recorded how many participants decided to become advocates themselves: this served as our main outcome variable.

Finally, participants were again asked about their beliefs regarding the percentage of respondents who had previously signed up ('Based on what you now know, roughly what percentage of past respondents to this survey do you think signed up and became advocates?'); they were also required to indicate their level of agreement with the statement: 'I can help shape health policy and improve the lives of patients as a member of the LLS Action Team.'

This project uncovered some interesting findings. First, participants updated their beliefs about the share that signed up in response to receiving the different signals. Second, being shown a signal of 100% (meaning participants were informed that 100% of the other LLS group members decided to become advocates) had the largest effect on signup rates as compared to the no-signal control group. However, being shown a signal of 0% participation had the second strongest effect on participation rates. These observations suggest a non-linear effect of signalling on behaviour (represented in Figure 1). 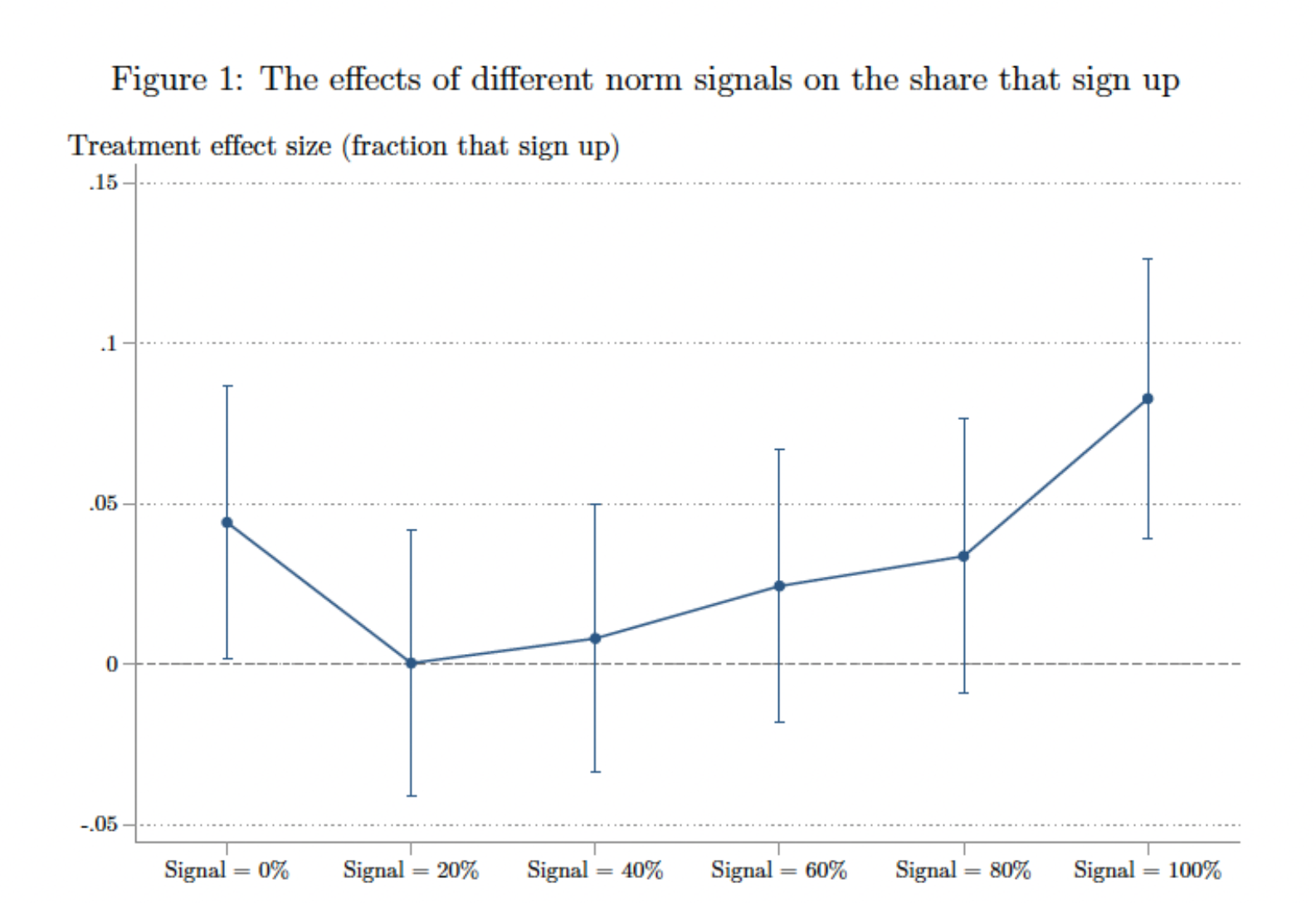 So, what do these findings tell us about how descriptive norms work? For one thing, this research debunks the notion that signalling higher participation rates is always better. If it's a choice between signalling 30% participation or 0%, the latter may be more effective at garnering increased engagement, at least in the context of voluntary or charitable activities.

In short, the results of this experiment highlight that Wikipedia's fundraising approach is, in fact, consistent with the research concerning how descriptive norms influence beliefs and subsequent behaviour. This research also underscores that there is much we still do not know about how descriptive norms operate. Though the psychological mechanisms underlying this pattern remain inconclusive, The Behaviouralist's novel research sets the stage for future investigations into the inner workings of social proof theory.

Keep an eye on our website for updates on this and other projects!