Do nudges crowd
each other out?

Whether by design or by happenstance, nudges are all around us. Our behavior is designed through these informational or environmental changes that influence our behavior without changing financial incentives. Think of changing a consumer decision from an opt-in to an opt-out, or notifying a customer that their decision will be disclosed to their friends or the general public. While some nudges are effective when examined in isolation, in this noisier context they may be crowded out, having no effect on behavior. This poses a serious problem when designing effective behavioral interventions.

If the effect of multiple nudges is less than the sum of the parts, individual estimates may overstate their effectiveness.

Existing research offers little guidance on the nature and extent of this problem. In social psychology, research has shown a person can be more likely to display pro-social behaviour if the researcher has already previously asked them to do something, or less likely. The direction of the effect is ambiguous. Another strand of research has demonstrated that pro-social behaviour today can influence whether a person makes more or less selfish decisions tomorrow. “Maybe, maybe not” is not a terribly helpful answer to the policy-maker attempting to choose an effective set of nudges.

In a paper published in the Proceedings for the National Academy of Sciences, my coauthors and I examined whether the effectiveness of social nudges — appeals to a person’s social instinct such as a desire to conform — is diminished by the earlier receipt of a different (but related) social nudge. By comparing the effect of the two nudges in isolation and in combination, we were able to show whether crowding out occurs.

Working with Opower (now Oracle Utilities), we ran a large natural field experiment in Southern California in the summer of 2014. When the network is at peak load, policymakers generally wish to reduce demand; as there is generally a mismatch between wholesale and resale prices within and across days, shifting consumption to different periods can lead to large reductions in emissions and improvements in social welfare. Our first nudge — the ‘Peak Energy Report’ (PER) targeted household electricity consumption at these times. Our second nudge, the ‘Home Energy Report’ (HER) targeted aggregate household consumption. 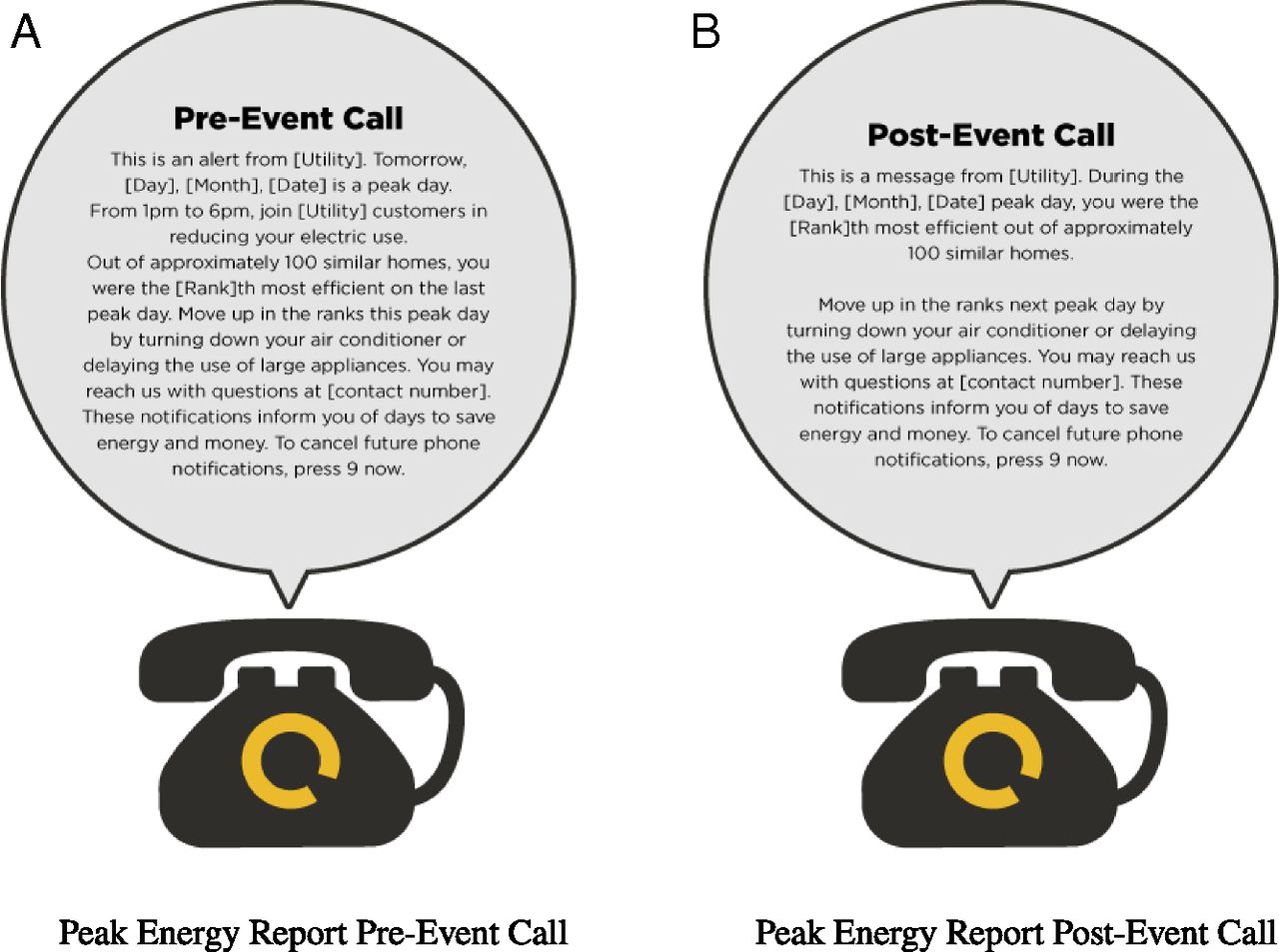 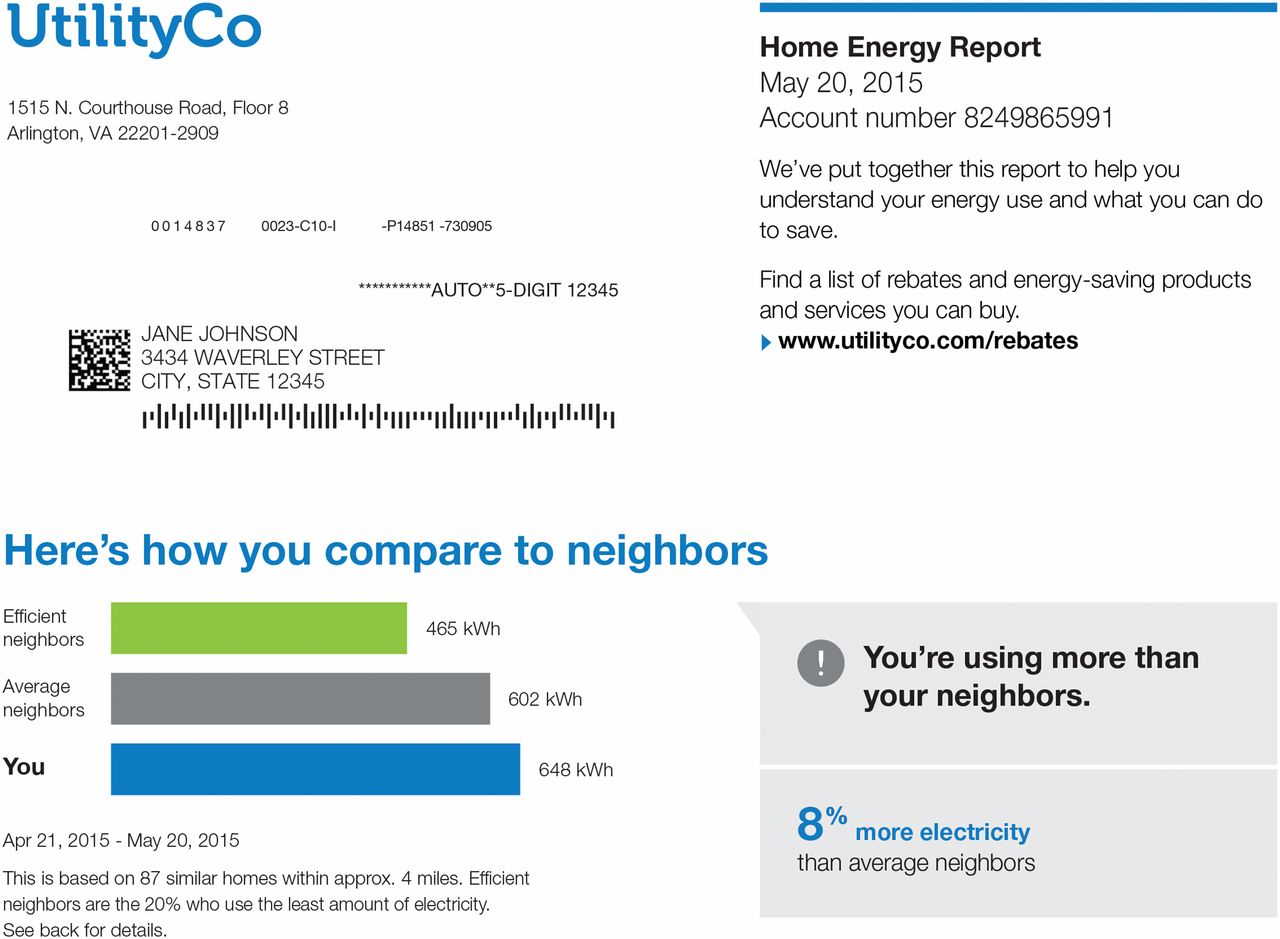 Our experiment took place over three peak load days. We randomly assigned 42,100 households to either:

We then gathered more than 30 million observations of hourly household electricity consumption.

To assess crowding out, we compared the effect of receiving both social nudges during these peak load events to the sum effects caused by the HER and PER nudges in isolation. If the combined effect is less than the sum of the parts, then receipt of one social nudge crowds out similar interventions in the future.

Our results showed that receiving the PER caused a 3.8% reduction in electricity consumption during a peak load event, and the HER 2.1% cut. When received in combination, the two social nudges caused households to reduce their electricity consumption by 6.8%. In short, the effect of the PER was not crowded out when households already received the HER, and the two nudges appear to be perfectly additive.

The graph below shows the impact on the groups across the day, including the peak load event window (1pm-6pm). The treatment effect for the HER + PER group (red line) is additive of both the PER (blue line) and HER (grey line) groups treatment effects. 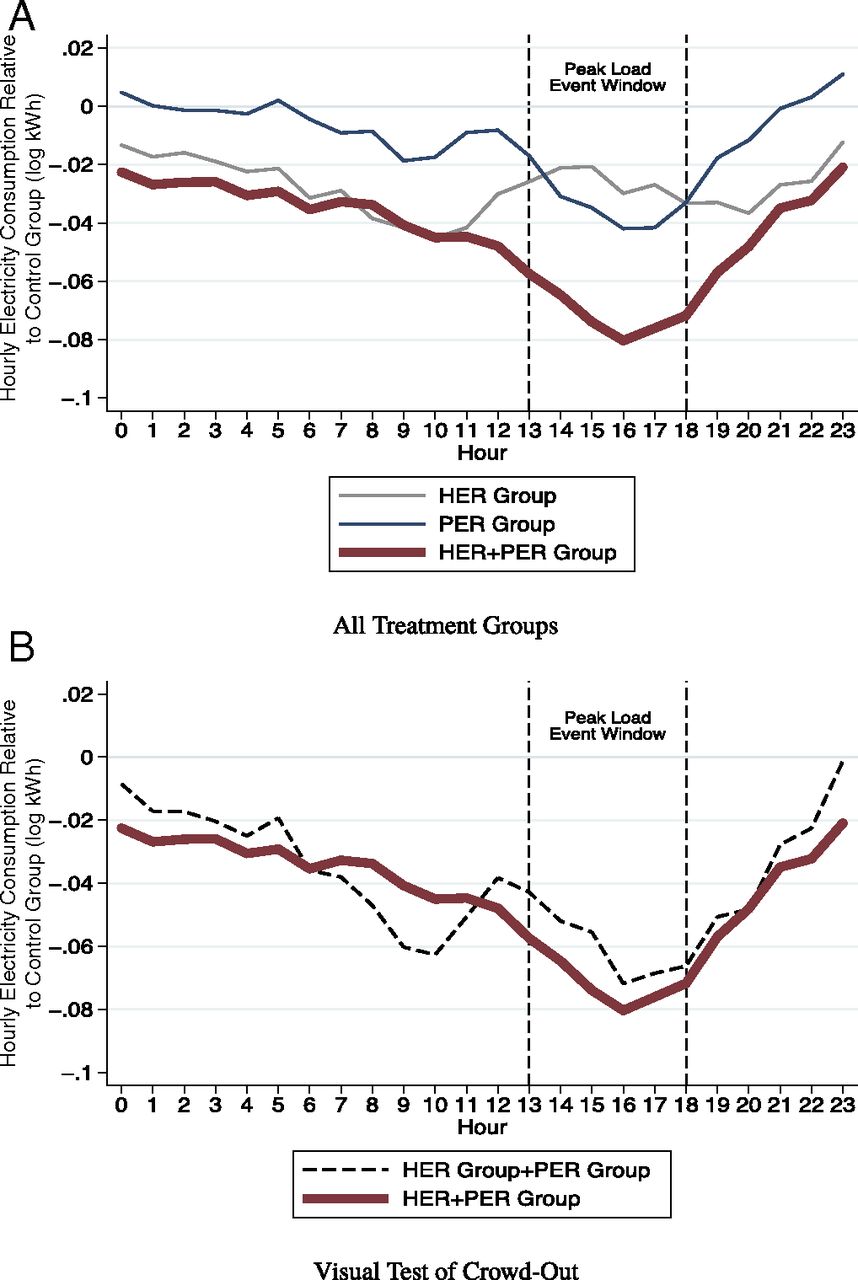 To put these effects into perspective, this 7% reduction in demand is roughly equivalent to increasing the price of electricity by nearly 70% during peak load events. People are quite price inelastic during peak demand periods, so this nudge might help increase social efficiency.

While this may not generalize across all locations and industries, it does provide the first evidence on the dynamics of nudging to achieve multiple policy targets in the market for electricity. More research in this area is vital; nudges and behavioral interventions are rarely implemented in isolation, and understanding how they fit together is vital for success.